Winning Big with Return-It to Win-It 2018

Victoria resident Andrea Jabs is big on recycling. That’s why she’s played Return-It to Win-It, the free-to-play contest hosted by Encorp, for the last three years. After all, where’s the harm in trying to get a bit more out of her weekly trips to Glanford Bottle Depot?

Several times a month, Andrea would enter the contest PINS she had collected from her Depot trips and hope for the best. It turns out 2018 was her year: a few weeks ago, the lucky woman received a phone call letting her know that she had won the grand prize—$25,000 cash. 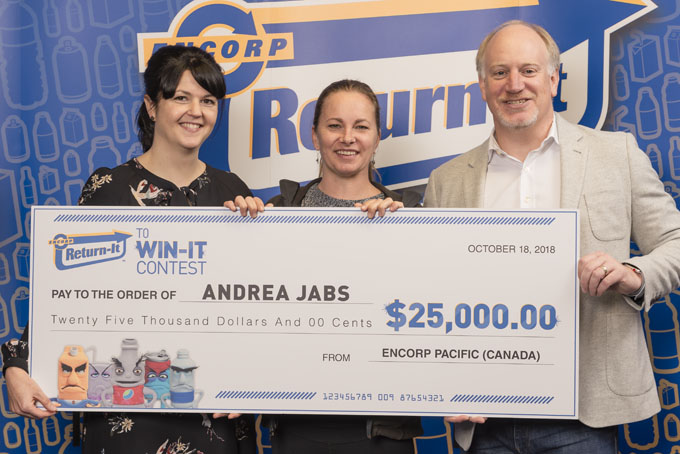 “I cried,” Andrea recalls, laughing. “I really needed this.”

The lucky winner owns a small home maintenance company in her hometown of Victoria. She’s passionate about helping people take care of their things when they can’t do so themselves. “These people need me,” she explains. For her, making a positive difference in people’s lives is what makes her work so rewarding.

The contest winner is also a very serious recycler. “Everything can be recycled,” she says. Andrea even goes so far as to tell people to toss their empty containers in her work truck if they’re walking by. She’s happy to take them to the depot herself, and it means recyclable containers don’t end up in the landfill. To Andrea, composting, recycling—these are all important ways to make a difference in our towns and neighbourhoods, and there’s no excuse to not do them if you can.

It’s people like Andrea that help keep beverage containers out of BC’s landfills, but as a province, everyone needs to do their part. “Plastic bottles are one of the most recyclable drink containers,” says Encorp President and CEO Allen Langdon, “and yet around 153 million still end up in the landfill every year.” That’s a huge number, and it doesn’t have to be. So, the next time you find yourself out and about with a plastic bottle, take inspiration from British Columbians like Andrea and save them for the Depot!

What’s more, returning your empties is now easier than ever. “When you sign up for Encorp’s free Return-It Express program,” says the Encorp President, “you no longer have to sort your drink containers. Every trip is automatically faster and more convenient.” The convenience-first program is also undergoing expansion: the plan is to open over 40 new Express locations across the Lower Mainland next summer, with other regions in BC to follow.

It’s always a great feeling when we can reward beverage container recyclers for doing good. But with Andrea, it seems like recycling is only a part of her do-good personality. According to her clients, friends, and family, “there’s no one who deserves it as much as [her].”