This year marks the 10th anniversary of responsibly recycling end-of- life electronics through the province’s government-approved stewardship program. Since 2007, over 180,000 metric tonnes of end-of-life electronics have been safely diverted from landfills to ensure recovered materials go back into new products. The Electronic Products Recycling Association of British Columbia (EPRA BC), which operates the program, is challenging residents to take old devices to their local depot in support of International Recycling Day on May 17.

According to polling, 83 per cent of adult British Columbians have at least one unwanted electronic item in their home, but only 44 per cent of residents have taken an old e-device to a Return-It™ facility or other approved EPRA drop-off location over the past 12 months.

“The vast majority of British Columbians have old electronics collecting dust at home, so we’re issuing a friendly challenge to take them to a drop-off location,” said Craig Wisehart, EPRA BC’s Executive Director. “Our job is to make electronics recycling as safe, secure and convenient as possible. We now have more than 260 depots throughout the province, so most people live within 30 minutes of an approved drop-off location.” 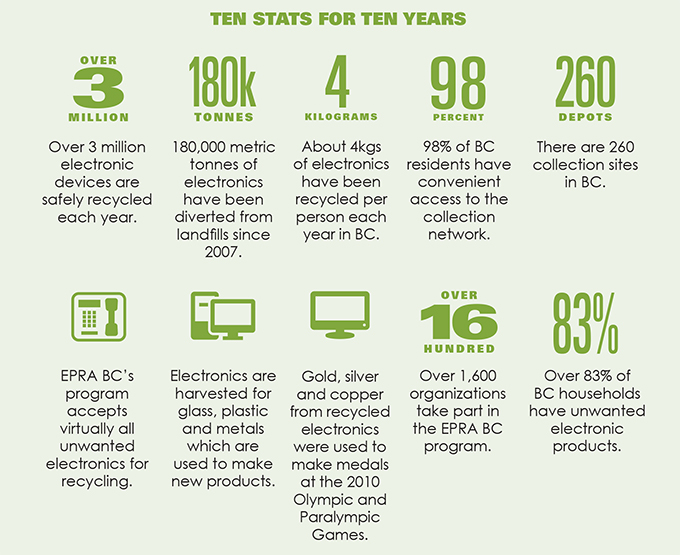 “To give people a sense of what 180,000 metric tonnes means, that’s roughly equivalent to the weight of 2.2 million people, which is nearly the population of Metro Vancouver,” added Wisehart. “Awareness for our program is high, but we still have work to do in terms of getting British Columbians to recycle their obsolete devices. We need to convert that awareness into action.”

You can recycle virtually all electronics under the program including computers, audio and video equipment and even electronic musical instruments and electronic toys.  With free drop off and a location close to you recycling your end-of-life electronics is easier then ever.